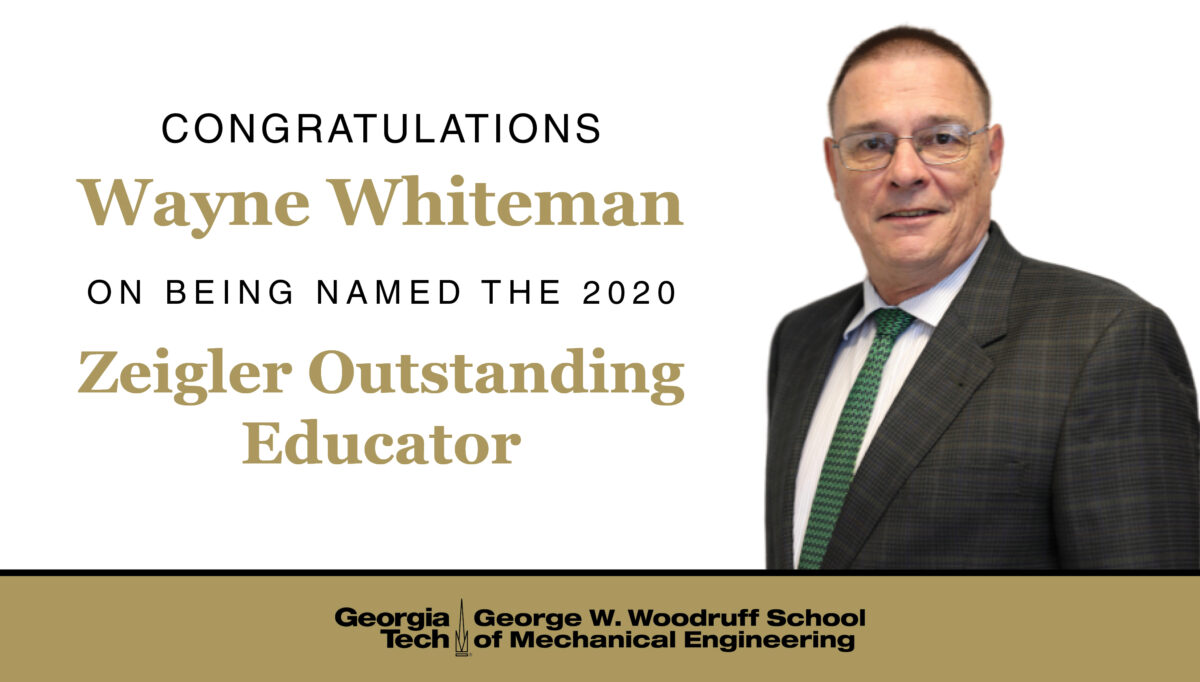 Whiteman directs the Office of Student Services in the Woodruff School and works closely with both the undergraduate and graduate programs in mechanical engineering. In addition to his administrative responsibilities, he enjoys teaching and working in the field of engineering education, including serving as a thesis advisor for many masters students. Whiteman also offers several engineering courses online through the Coursera.org platform.

Wayne Whiteman joined Georgia Tech after serving as an assistant, associate, and full professor at the United States Military Academy at West Point, New York. He retired from military service in 2003 after 24 years of service as an officer in the Corps of Engineers at the rank of Colonel. His military field assignments culminated in his command of the 577th Engineering Battalion at Fort Leonard Wood, Missouri.

The Jack M. Zeigler (BME 1948) Woodruff Outstanding Educator Award was created in 1999 to recognize an outstanding educator among the academic faculty of the George W. Woodruff School of Mechanical Engineering at Georgia Tech. This is a lifetime achievement award that a person can receive one time. The winner is announced at an annual spring School event and receives $5,000 in discretionary funds to use for professional development items such as travel, computers, and support of students. The winner is invited to deliver the Jack Zeigler Outstanding Educator Lecture at an assembly of the Woodruff School. The winner is selected by a committee appointed by the Woodruff School Faculty Advisory Committee.

Mr. Jack M. Zeigler (class of 1948) received his bachelor’s degree in mechanical engineering after interrupting his education with 3 ½ years of service in the U.S. Army.  While at Georgia Tech, he was a co-op student at two companies, where he worked primarily as a draftsman. In one company he earned $1.25 an hour; this was a raise from $0.55 per hour at the other company.

Mr. Zeigler, who passed away at the age of 93 on May 28, 2016 , was the retired President and Owner of Fabrication Engineering Service Company, Inc. (FESCO).  FESCO specializes in the made-to-order fabrication business using high quality alloy steels to produce tanks for the chemicals industry and pressure vessels for textile manufacturers.

Until his retirement in 1989, Mr. Zeigler was a registered professional engineering in Alabama, Georgia, North Carolina, South Carolina, and Virginia, and he was a lifetime member of the American Society of Mechanical Engineering and the American Welding Society.