For decades, a laboratory technique called patch clamping has been the gold standard for measuring the electrical properties of individual cells.
The process, which has been particularly useful in neuroscience, involves bringing a pipette filled with electrolyte solution and a recording electrode connected to an amplifier, into contact with the membrane of a single cell. So basically, researchers can eavesdrop on the furtive chattering of neurons in the ongoing effort to unlock the brain’s secrets. 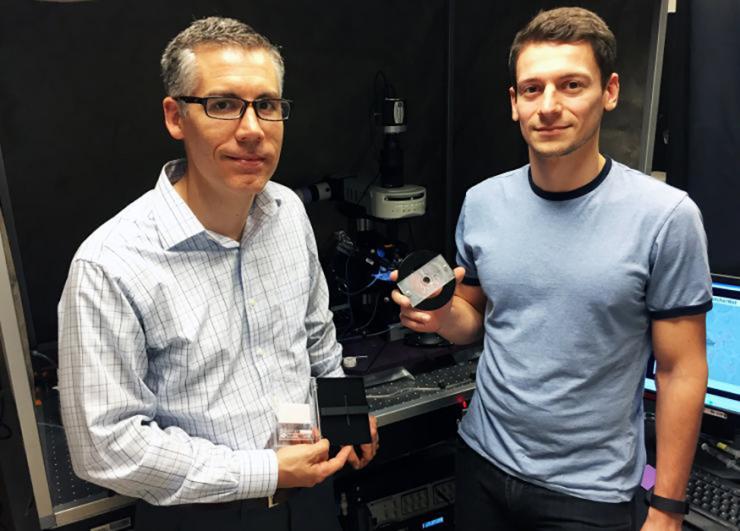 “Thousands of people practice this technique every day around the world,” says Craig Forest, a researcher in the Petit Institute for Bioengineering and Bioscience at Georgia Tech. “But it is painfully tedious and time consuming.”
So Forest and his colleagues decided to speed things up a bit. And now, their automated patch clamping robot – the ‘patcherBot’ – is being commercialized and will be made available to researchers worldwide with the signed licensing agreement between Georgia Tech Research Corporation (GTRC) and Sensapex, an electrophysiology device company based in Finland.
“This is exciting, because this technology is going from the lab, from some research journal articles, into the real world,” says Forest, associate professor in Tech’s Woodruff School of Mechanical Engineering and in the Coulter Department for Biomedical Engineering at Tech and Emory University.
“Our mission is to develop tools that make new science possible,” he adds.
Forest’s lab has been working on iterations of the patcherBot for at least six years, developing an image guidance version to target cells and automation technology to create a tight seal between the glass pipette (one micron in diameter) and the cell membrane, which provides a direct electrical connection to the inside of the cell.
In 2016 the research team overturned decades of dogma in the field, developing a robotic technique for reusing the pipettes – for years, went the assumption, these tiny glass tubes could only be used once and were then thrown away. Ilya Kolb, a former graduate student in Forest’s lab, questioned this and set out to find a cleaning method, now patent pending, that could adequately sterilize the pipettes.
“Traditionally, a researcher could do five to 10 recordings a day, and that’s if they’re really good,” Forest says. “Our idea was to clean the pipette automatically after each recording, so we could tell the robot to go back to cells over and over. You don’t even have to be in the room, just set it up and leave, and when you come back to the lab, you’ve recorded about 100 cells.”
Now, a researcher in a biology lab doesn’t have to be an expert in pipette pulling or patch clamping, says Forest, who has talked about the technology “democratizing this area of research,” and sees the potential of patch clamping becoming as commonplace as PCR (polymerase chain reaction), a common biology technique to make many copies of DNA.
Sensapex already has a customer – the first patcherBot will be delivered in April 2019 to Janelia Research Campus, one of the world’s leading neuroscience research centers, part of the Howard Hughes Medical Institute. And Forest’s former grad student, Kolb, is now a researcher at Janelia, which has been on a 10-year optogenetic mission to develop fluorescent molecules – optogenetics uses light to control neurons that have been genetically modified to express light-sensitive ion channels.
At the annual meeting of the Society for Neuroscience in October, where 30,000 neuro-researchers will gather in Chicago, Sensapex will have the patcherBot on display.
News Contact Info:
Jerry Grillo
Communications Officer II
Parker H. Petit Institute for
Bioengineering and Bioscience
To Top