David Hu started at Georgia Tech in late summer 2008 as an Assistant Professor of Mechanical Engineering; he holds a joint appointment in the Department of Biology. Prior, from 2005 to 2008, he was an Instructor of Mathematics at Courant Institute of New York University. He was promoted to full Professor in 2019.

Dr. David Hu's research focuses on fundamental problems of hydrodynamics and elasticity that have bearing on problems in biology. He is interested in the dynamics of interfaces, specifically those associated with fluid-solid and solid-solid interactions. The techniques used in his work include theory, computation, and experiment. He is also interested in pursuing biomimetic technologies based on nature's designs. 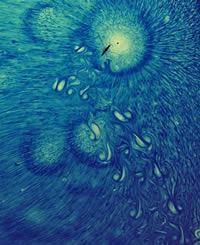 Recently, he has become interested in the dynamics arising from the interaction of flexible textured surfaces. All terrestrial locomotion is accomplished by increasing friction in some areas and decreasing it in others. There has been much work on locomotion by considering the rigid-body dynamics of bodies with smooth surfaces (e.g., passive walkers, bicycle dynamics; Ruina 2007). There is even a great deal of knowledge of the motion of rigid devices over compliant terrain such as snow or mud (terramechanics, tank treads; Muro and O'Brien 1989). However, little is known about how optimal propulsion is obtained with when both surfaces are flexible or compliant. This is an important area because flexible surfaces provide means to modulate friction in ways rigid surfaces cannot. We have begun to explore this area by a combined experimental and theoretical investigation of snake propulsion.

Water striders are insects that support their weight by surface tension and propel themselves by sculling with their hydrophobic legs. Previous investigators assumed that the hydrodynamic propulsion of the water strider relies on momentum transfer by surface waves. Our flow-visualization experiments reveal that the strider transfers momentum to the underlying fluid not primarily through capillary waves, but rather through hemispherical vortices shed by its driving legs.