A Brief History of Georgia Tech and the Woodruff School 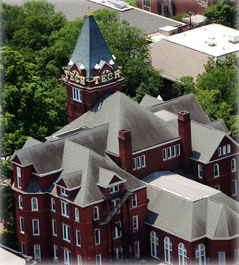 A school of technology was established in Atlanta in 1885. In October 1888 the Georgia School of Technology opened its doors and admitted its first engineering class: 129 mechanical engineering students enrolled in Tech's first degree program. As part of their education these early students worked at trades such as forging, woodworking, machining, and mechanical drawing. The products of these shop exercises were then sold to the public to produce income for the School.

The first Head (starting in 1888) and Professor of Mechanical Engineering was John Saylor Coon, a graduate of Cornell University and a charter member of the American Society of Mechanical Engineers. He held this position for 35 years until his retirement in 1923. For eight years mechanical engineering was the only degree offered at Tech, and Dr. Coon saw to it that classes were challenging---so challenging that only 28 of the original students earned degrees. Uncle Si, as Professor Coon was known, set high standards, which became a precedent at Tech.

Over the years, the mechanical engineering program expanded and changed. By 1896, the contract system of shops had been abandoned. Free from the need to render a profit on instructional time, Dr. Coon implemented an educational format which, while it retained elements of hands-on shop training, placed more stress on the emerging tenets of quantification and analysis. Dr. Coon revised the curriculum, describing a mechanical engineering program that emphasized design, mathematics, and problem solving. Prominent here was a senior thesis, which was an experimental laboratory project emphasizing design and testing. Increasing emphasis was given to higher mathematics, theoretical science, and original research. The experimental project requirement survives today as the capstone experimental engineering course.

The notion that an engineer was a technical master first and a businessman second permeated the curriculum of Georgia Tech at the turn of the century. Mechanical engineering students conducted efficiency tests for businesses in Atlanta and experiments using campus facilities. Practical projects at local businesses became a significant part of the educational process at Georgia Tech, especially after the Cooperative Program officially began in 1912. This continues to be the largest optional program of its kind in the country. About forty percent of all mechanical engineering undergraduate students at Georgia Tech are involved in the program. In addition, there is a Graduate Co-op Program, an International Co-op Program, an Undergraduate Professional Internship Program, and a number of study-abroad programs for students to gain international experience.

Tech graduated its first two students, with bachelor's degrees in mechanical engineering, in 1890. The first MSME was authorized in 1922, and a doctoral program was added in 1946. The first MS degrees were awarded in 1925, and the first Ph.D.'s were granted in 1950. Georgia Tech was renamed the Georgia Institute of Technology in 1948. Women were admitted in 1952, and the campus was voluntarily integrated in 1962. In 1949, the Department of Mechanical Engineering officially became the School of Mechanical Engineering with its own director and administrative staff. In 1985 the School was named for its benefactor, distinguished Atlanta business and civic leader, the late George W. Woodruff (class of 1917).

Research and teaching in the Woodruff School is directed by a distinguished group of 95 academic faculty, 72 full-time research engineers and scientists, and 10 academic professionals. Also, many of our graduate students are employed as research assistants and are an integral part of this technical community. Faculty work in all the traditional and cutting-edge areas of mechanical engineering: acoustics and dynamics; automation and mechatronics; bioengineering; computer-aided engineering and design; fluid mechanics; heat transfer, combustion, and energy systems; manufacturing; mechanics of materials; MEMS; and tribology. Faculty participating in the Nuclear and Radiological Engineering/Medical Physics Program do research in fission, fusion, and medical physics. In 2019-20, Woodruff School research teams conducted work on more than $45 million worth of grants and contracts from government and industry.

In 2000, the American Society of Mechanical Engineers recognized the Woodruff School as a Mechanical Engineering Heritage Site. Of the 225 landmarks, sites, and collections, we are the only educational institution with this honor, which was granted for the impact that mechanical engineering education at Georgia Tech had on the South and the nation.

Graduates from Georgia Tech have always had a hand in helping build industry in the South. This is as true today as it was when Georgia Tech was opened in 1888 and began to educate engineers and revitalize the economy of the South, devastated after the Civil War. Today's rigorous engineering curriculum allows our students to continue to have a lasting impact on the global society.