Travis and Troy Nunnally: In their Own Words

September 30, 2020
By Candler Hobbs
Travis (Master’s ME 2009) and Troy Nunnally (ECE Master’s 2009 and Ph.D. 2014) are known as the “Tech Twins” in the Atlanta entrepreneurial community. They are native Atlantans and identical twins who earned engineering master’s degrees from Georgia Tech and went on to build their own company, Brain Rain Solutions – which specializes in combining augmented reality and the Internet of Things technology to help companies design, develop and deploy mobile web applications. In addition to running their company, Travis and Troy have several initiatives to help other minority entrepreneurs get their ideas off the ground. 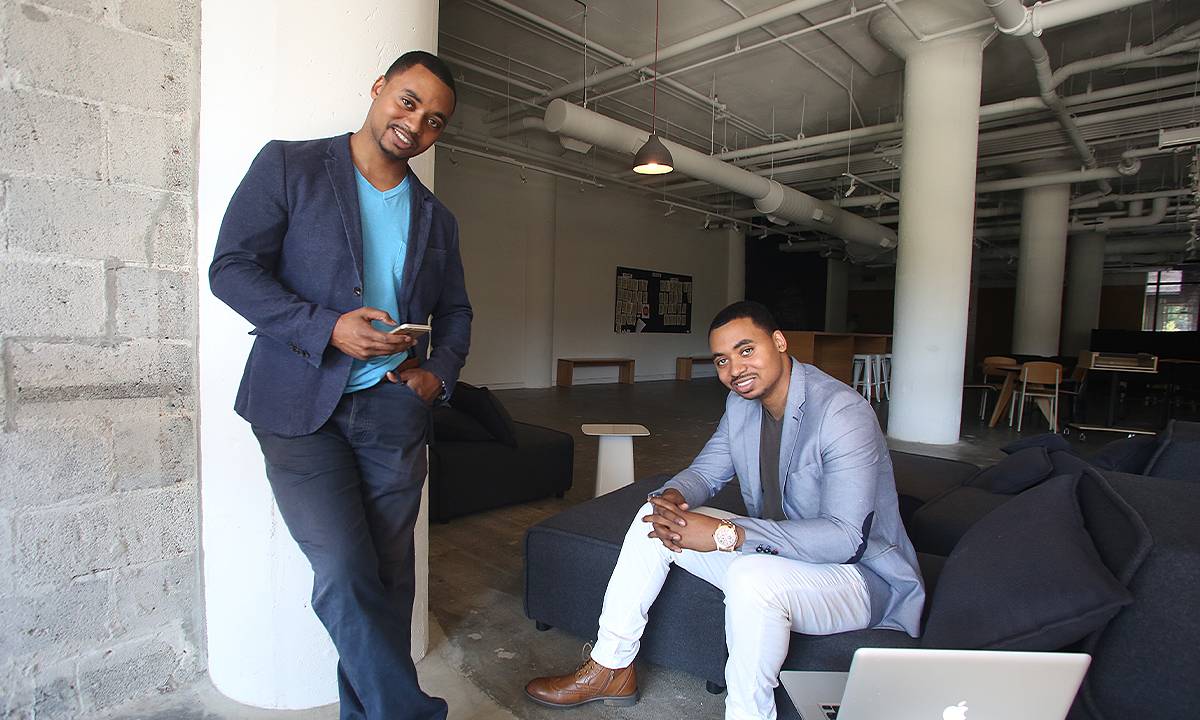 Travis and Troy Nunnally at Brain Rain Solutions
Dean McLaughlin recently had a virtual chat with Travis and Troy discussing their company, entrepreneurship culture in minority communities, and their time while studying at Tech.
Here are some excerpts from that conversation:
Steve: I know that one of your aspirations, either personally or as part of your company, is to touch 10,000 companies or to assist them in their development. How is Brain Rain Solutions doing that? Also, tell us a little bit about how Brain Rain got started?
Travis: So, we started in 2009. The company actually originated from a project at Georgia Tech. We were part of the organization at Georgia Tech that was launching and hosting a symposium, which essentially consisted of all Georgia Tech graduate students showcasing their work. At that point, they needed a way to house these abstracts and show these abstracts to sponsors and visitors like, for example, Microsoft. They wanted to see basically a portfolio of these abstracts at the symposium. So, at that point, we saw a need (which is always what our company is focused on— finding a need first) and then we built a solution – a software to house these symposiums. We never build solutions unless the need is expressed and is backed up by customers willing to pay. We decided to grow it into a real business and have been launching and building software over the last 10 years. We’ve helped directly build over 250 software projects. We've helped and consulted with I think 5,000 companies and we have a goal to reach 10,000 companies that we at least consult with.
Troy: So currently we have around 13 employees. Some of them are here locally, and then we have a couple that are overseas— they oversee development. Our company name is Brain Rain Solutions.  It’s primarily built upon two principles that you have the brainiac and you have the rain maker. The rainmaker really brings in the revenue— that's the sales person; that’s the marketing team. And then a brainiac is the person who's executing— that’s the technologies; that’s the CTO; that's the programmer. And since we’re identical twin brothers, it worked really well because I was really technical savvy and I could be able to think of it and I can build it and really have a high technical prowess. And then you have my brother who you can see he's good looking and he's well-spoken. He can go into a sales meeting and pitch the idea. So that was the idea behind Brain Rain Solutions. It just happened so that we're two different people that have a complimented skill set to work together.
Steve: One of the things that we think we do really well at the College of Engineering, and it's a huge priority for us, is to create the most diverse and inclusive environment that we could possibly imagine. And I'm really curious about your experience in that regard. What was your experience like at Tech and then after graduating and building your business in the Atlanta community?
Travis: There’s a strong minority culture at Georgia Tech. We were blessed to be a part of the Black Graduate Student Association. AASU has a very strong presence at Georgia Tech. And what I mean by strong presence is that what we don't have in numbers, we have in community. We may not be a majority from an ethnic background or culture background, but we have a very close-knit community where everybody is willing to help each other out. Some of our best friends even today were from the Black Graduate Student Association. We meet regularly. We have a GroupMe chat from people that we met back 10 years ago at Georgia Tech, and they're our friends.
For us, we took that minority presence and then we brought it to tech and entrepreneurship after Georgia Tech in the startup community. So, what we're doing from a minority standpoint in the startup community is we're trying to build that same closeness that we had at Georgia Tech in that community with the closeness of the community to the greater black Atlanta tech community. So, we’ve started a couple of initiatives. The first one is, of course, the 10,000 Founders initiative, where we are focused on helping 10,000 founders with an emphasis on minorities. You don't have to be a minority, but we do target some minority business to come into our marketing system. And then also we started a space here in Atlanta in Castleberry Hill. It's about, right now, 4,000 square feet. We're co-founders with other people. Four of whom are Georgia Tech alumni. And the whole purpose of space is to build and showcase the quality of the work coming out of the minority tech ecosystem.

Steve: Statistics show that still a vast majority of companies that have started are not started by minorities. How can we change both the narrative and the reality tied to it? Is it the investment community? Is it the education community? Is it the city? Is it the culture? What are the things that we can really work on to change some of those?
Travis: So, that's a really good question. And the number one thing is that you have to put yourself in the place of a minority person. When we are starting our companies, we oftentimes, feel like we're trapped. But we statistically don't have the wealth, especially as a black minority compared to other ethnic groups, so we feel like we're trapped. We oftentimes have high debt, and we feel like if we jump off and do our own thing, then we're going to crash and burn. So for us, knowing that those people who have this pit— this pain in their stomach that they have to do something different with their lives and they don't want to be at a dead end job for the rest of their lives, they have to have something to motivate them to get out of the trap. So, what we do is we’ve started putting content in place where we can help people motivate to take action. And sometimes it's really simple for us.
Troy: Right now, the Atlanta startup community is starting to be coined the “Atlanta black tech mecca,” because right now here in Atlanta, we have found a way to really unite and create an ecosystem around minority-owned businesses.
One of the gaps, though— I have to mention it— is, statistically, you don't see a lot of minority entrepreneurs with VC [venture capital] funding. When you talk about funding, there's a pipeline you have to go through. You have to build out proof of concept. In order to build your proof of concept you can build it yourself if you have the knowledge, but that typically requires a computer scientist or engineer, or you can go out and get the resources to do that, and that requires family and friends to help donate to build out that proof of concept. The problem is, as Travis alluded to, African Americans are the lowest income out of all minorities. We don't have that uncle who's willing to give us $5,000 dollars, $10,000 dollars to build out a proof of concept. So, we never even reach the VC stage when you have traction because the VC stage only invests in, mostly, companies that have some type of traction and revenues. So that's one of the issues that a lot of people are trying to address is how do you get an entrepreneur, a tech entrepreneur, who may not have a background, who moved through that funding pipeline to grow their company.
Steve: What kind of advice would you give to students, particularly minority students who don’t necessarily have the ability to follow the path that you did?
Troy: My advice would be to stay consistent. So always think persistent and consistent about learning a particular craft. Start around a problem. As kids we started around a problem of wanting to build a go kart or a soapbox. And from there, that allowed us to start using skills and start learning skills that are related to building that. We also had a problem when we were in college to have a place for resumés to be online, so we started doing a symposium. So, start with the problem. Start with something that you have a passion for and that kind of allows you to fuel your learning capabilities.
Travis: Yeah, and mine is very similar. I think that you have to be passionate and, nonetheless cliché, but at the end of the day, find something that you simply love and enjoy. But not only find that thing— but actually be a lifelong learner around that. And it may look like engineering. It may look like becoming a tech entrepreneur. You may want to be a developer or you may want to start your own Tesla and build out your own car. But I would say be passionate about it first. Think big.
To hear more from Travis and Troy Nunnally, check this episode of The Uncommon Engineer.
To Top