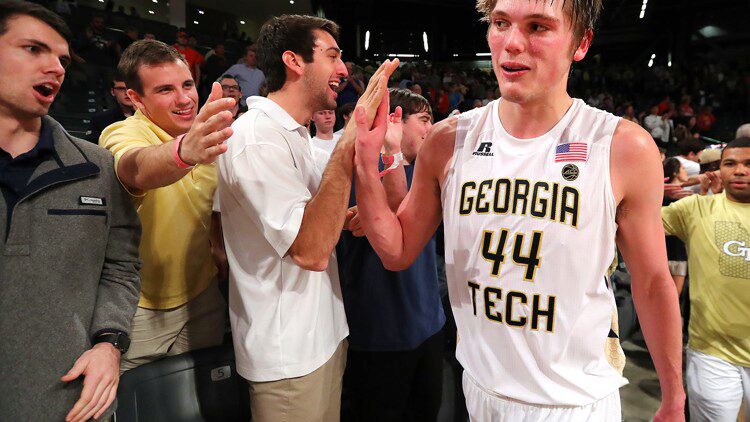 Usually in college athletics, recruiting stories are told by coaches and athletes. In the case of Georgia Tech center Ben Lammers, an associate dean in the school’s college of engineering gets a turn to spin a yarn.

Tech professor Laurence Jacobs recalled Lammers’ visit to the school in September 2013 when then-coach Brian Gregory was trying to lure him from San Antonio. Part of the visit included a stop at the Invention Studio, a multi-million dollar space in Tech’s main mechanical-engineering building that is outfitted with 3-D printers, oscilloscopes, water-jet cutters, lathes, bandsaws and other tools to enable students to tinker with ideas and projects.

“We took him through that facility, and I remember his eyes just lit up,” Jacobs said. “He was just, like, Wow, this is exactly what I want. I remember him saying to me, ‘If I come to Georgia Tech, can I do this?’ And I was, like, ‘Absolutely.’”

The story doesn’t end with Lammers committing to Gregory — or Jacobs — on the spot, over the din of a belt sander. More broadly, though, Lammers’ endeavor to marry his pursuit of a mechanical-engineering degree with elite play in the ACC has continued through this week, when he dropped 20 points on Pittsburgh on Tuesday, pulled a near all-nighter to study for a thermodynamics exam Thursday and then left campus with the team Friday to play at Syracuse on Saturday afternoon in the Yellow Jackets’ regular-season finale. Lammers programs robots, passes like a point guard and holds a future that could include either of two acronyms at the tops of their respective fields — NASA and NBA.

Tech assistant coach Eric Reveno, who prepared seven big men for NBA jobs during his nine-year term as an assistant at Stanford and then coached an academic All-American during his 10-year run as head coach at Portland, knows all about players who were equal parts scholar and baller.

“But he’s kind of at the top of both,” Reveno said. “It’s a unique combination.”

Lammers has bent toward engineering since his childhood. Lammers’ father Chris, who played football at Texas A&M and now designs college sports facilities, recalled him taking him apart remote-control cars and trying to fashion new machines with the parts. He and his older brother, Nick, entertained themselves by making potato cannons and trebuchets, the latter often used to catapult tomatoes and potatoes into an empty lot next to their family’s home.

“We made great friends with our neighbors,” Chris Lammers said.

The opportunity to study engineering at Tech, where all 10 undergraduate disciplines have ranked in the top six nationally by U.S. News & World Report for the past five years, was a strong pull for Lammers over Miami, Marquette and Stanford. Plus, as an introvert whose interests include video games and World War II history, Lammers found appeal in a campus teeming with fellow engineering students.

“I don’t think I would be the clubbing type if I were at Miami,” he said.

A common path for engineering students at Tech, athletes or otherwise, is to switch to the business college after running up against the fierce rigor of the engineering department. Lammers weathered a rough freshman year, but dug in his heels, in part because he suspected his coaches anticipated him backing down.

Lammers envies the free time that many teammates enjoy, he said, “but I’m also very stubborn. So once I got in here for like a year, I was like, there’s no way I’m changing.”

Despite the challenge of frequent missed classes because of travel, Lammers has managed and even thrived. His GPA is around a 3.0, he said. Lammers said he has a “system” where he puts off work and then plows through it on a specified day or two.

“It hasn’t drastically failed yet, so we’re going to keep on going,” he said.

Lammers’ aptitude helps. Besides his architect father and educator mother, engineers and architects populate the extended family. Lammers’ sister, Allie, is earning a master’s in education, and his brother majored in physics and philosophy at Colorado College and is pursuing a Ph.D. in biophysics at Cal-Berkeley.

“He makes me look bad,” Lammers said of his brother.

Jacobs, the associate dean, said that Lammers would have been admitted to Tech without basketball and places him among the top third among engineering majors, no small achievement at a department that sends graduates to Google, Apple and NASA and graduate programs at MIT, Stanford and Cal Tech.

This semester, Lammers’ load includes thermodynamics and fluid dynamics. Missing classes for travel is particularly penal in those classes, he said, because the curriculum builds so much on the previous class.

“So then I’ll miss a day and I’ll go the next day, but I just will have no idea what he’s talking about,” he said.

Lammers has compensated by, essentially, teaching himself the subject material with the textbook, sometimes as he’s preparing for tests. Lammers allowed, “That’s maybe not the best strategy.”

“I don’t know how he does it,” said Chris Lammers, his father. “I really don’t.”

Lammers particularly relished a class he took last summer, Mechanical Engineering 2110 (Creative Decisions and Design), in which students collaborate to build a robot that competes against other teams. The robot was tasked with grabbing one block, pushing away another and holding a third over the game board. Having clicked with the computer language LabVIEW, Lammers became the team’s go-to programmer.

“He was the guy who would do the coding, and we would build the machine to do certain things,” teammate David Tsui Chang said.

The problem solving was relentless, but Lammers lost himself in the challenge. In a typical week, Lammers spent six or seven hours per day on the project, four days per week, tinkering with the robot. On days when reports were due, Lammers’ team pulled all-nighters, after which he headed to practice or a weightlifting workout.

The team was seeded 27th of 28 teams, Lammers said, but ended up reaching the semifinals. When he called home to tell his parents, Chris Lammers said, his son was as excited as he was after the last-second win over Notre Dame in January.

With his excellence in both his studies and basketball, Lammers has become something of the pride of the engineering department, at least for those who are aware that the tall guy who wears shorts to class is the third-leading shot blocker in Division I and a strong candidate to be first-team All-ACC and the league’s defensive player of the year and most improved player when awards are announced Sunday.

Even Tsui Chang, from Costa Rica, who became good friends with Lammers through the ME 2110 class, wasn’t fully aware of his classmate’s prowess earlier this season. He recalled a conversation with a fellow student that went something like this:

Tsui Chang: “No, dude, Ben is the guy who coded the mechanisms on our machine for 2110.”

In a memorable season, one that has surpassed all expectations, has an outside chance to conclude with the Jackets’ first appearance in the NCAA tournament since 2010 and has been driven by the often surpassing play of their 6-foot-10 coding wiz, the reality is that Ben Lammers is both.

- By Ken Sugiura - The Atlanta Journal-Constitution